Coalition for Rights & Safety for People in the Sex Trade (CRS) was founded with a $6,000 seed contribution from SWOP-Seattle as a broad coalition of organizations and individuals aligned with liberatory movement for sex workers and people in the sex trade in order to amplify the voices of people in the sex trade. Emi was hired as a very part-time Coordinatrix. Initial conversations included immunity for sex workers in need of emergency assistance, human trafficking used as pretext for homeless encampment sweeps by the City.

CRS met with various City and State officials, and worked with Rep. Mike Pellicciotti to introduce a bill to offer immunity from prosecution for prostitution when one calls for assistance as a victim or a witness of a violent crime. House Bill 1382 was watered down considerably during the legislative process but eventually signed into law in 2019.

In the same year, we worked with Strippers Are Workers on passing House Bill 1756, which established an adult entertainer advisory committee and enacted several safety protections for dancers. Compliance and effectiveness of these measures are limited, but we continue to work with SAW to advocate for better working conditions for dancers.

In March 2018, authorities seized Backpage.com and other websites began shutting down as SESTA/FOSTA was signed into law, causing immediate panic and economic devastation among our community. CRS responded by hastening its planned community survey so that we can pass out gift cards as stipends to community members in need. We also operated Kick the Can Down the Road Fund, an informal mutual aid funded by individual donations to pay for people’s immediate needs. We also used “SESTA=DEATH” graphic to promote awareness of harms caused by anti-trafficking legislations such as SESTA/FOSTA.

Also in 2018, we began partnering with CID Coalition, Parisol, and API Chaya to form what later became Massage Parlor Outreach Project (MPOP), which began outreach to massage parlor workers in Chinatown/International District. After SPD conducted raids on massage parlors in February 2019, we invited Elene Lam of Butterfly: Asian and Migrant Sex Workers Support Network to hold a public presentation at the Seattle City Hall and a training for community advocates, both of which were well-attended.

In November 2018, CRS signed up as a fiscally sponsored project of Social and Environmental Entrepreneurs, which opened up our ability to receive foundation grants. In the past, we have received major funding from Third Wave Fund, Open Society Foundation, Social Justice Fund Northwest, Circle of Justice Innovations, Fund for Trans Generation, and Kataly Foundation.

Along with other advocates, CRS continuously met with Seattle City Council members since 2018 to implement the recommendation of the City’s Reentry Workgroup to repeal prostitution loitering and drug traffic loitering ordinances which was rife with racial and gender profiling. The ordinances were eventually repealed in June 2020 at the height of Black Lives Matter uprising. We continued to push City officials to reduce criminalization and its impact, leading to the City Attorney’s office withdrawing all pending prostitution charges and terminating the practice of seeking prostitution exclusion (Stay Out of Areas of Prostitution) orders.

CRS founded and provided initial funding for Aileen’s, a community organizing and hospitality space for women working along the Pacific Highway in south King County in March 2019. We branched off Aileen’s after the program won a County grant so as to make a clear distinction between political organizing funds and social service grant funds, but continue to work closely with Aileen’s since then.

In response to the COVID-19 pandemic spreading in early 2020, CRS worked with Aileen’s to meet basic needs of South King County residents and worked along other groups to push for economic relief and expedited access to vaccination for sex workers and people in the sex trade.

After the March 2021 shootings of Asian women workers and their customers at multiple massage parlors in Georgia, MPOP was able, thanks to the ongoing outreach efforts, to immediately connect with local workers shocked by this very American tragedy. CRS worked with MPOP to hold a vigil in Chinatown/International District that was attended by hundreds including some workers and promoted workers’ perspectives in response to the media storm characterizing Asian women massage workers merely as victims. 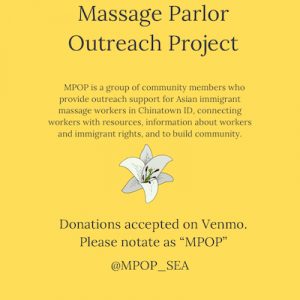 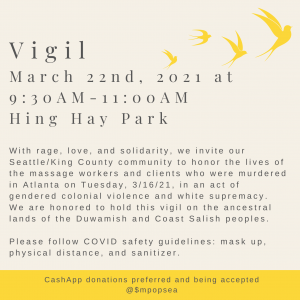 In addition to above, we have worked on many issues, often intervening in policy conversations that impact sex workers and people in the sex trade but do not consult with us, such as “anti-trafficking” measures, wider cirminal justice reforms, homeless and drug user rights, HIV transmission law and other public health policies, etc.